This was my first travel with Singapore Airlines and more especially on an Airbus A380-800, from New York JFK back to Frankfurt Germany. I was pretty excited about this flight. I heard that Singapore Airlines offered outstanding service onboard and I was looking forward to experiencing the world’s largest long haul passenger plane first hand. So far I had just seen the A380 from the outside while waiting at the gates of diverse airports. If you have done airtravels you propably got an idea about the sheer size of planes already. Even the smaller regional planes like the A320 are already pretty huge machines, e.g. commpared to a car, bus or truck. That these things can even fly, with hundreds of passengers, luggage and tons of fuel aboard is already close to a miracle. But when yoe then see the size increase from regional planes to long haul like the A370, it is massive. And if you then see such an A370 besides an Boeing 747, it is just jaw dropping! The classic 747 is massive massive massive machine, huge compared to most others – most, because then came the A380 which changed the game. If you see a 747 and a A380 next to each other then you start to understand the sheer size of the A380 – it is massive, with its two full passenger decks, enormous wing area and huge engines.

As I entered the plane I was, I have to admit, moderately disappointed. It looked and felt pretty much like any other long haul jet, the same interior, the same structure, the same seats etc. The only thing that was a little different of course is that the outer walls have a slighter other shape than on other planes. The regular economy class passengers are located on the lower deck, i.e. the outer hull of course does not bend towards the ceiling as much as in other single deck planes. But that’s about everything that was different.

A little more different was the flight comfort. Since the whole things is a lot bigger and heavier the flight is a bit smoother, which is pretty nice. And since the engines are located more far away from the plane body the noise during the flight is also less, which is also very nice.

A bit disappointing was the onboard entertainment system: 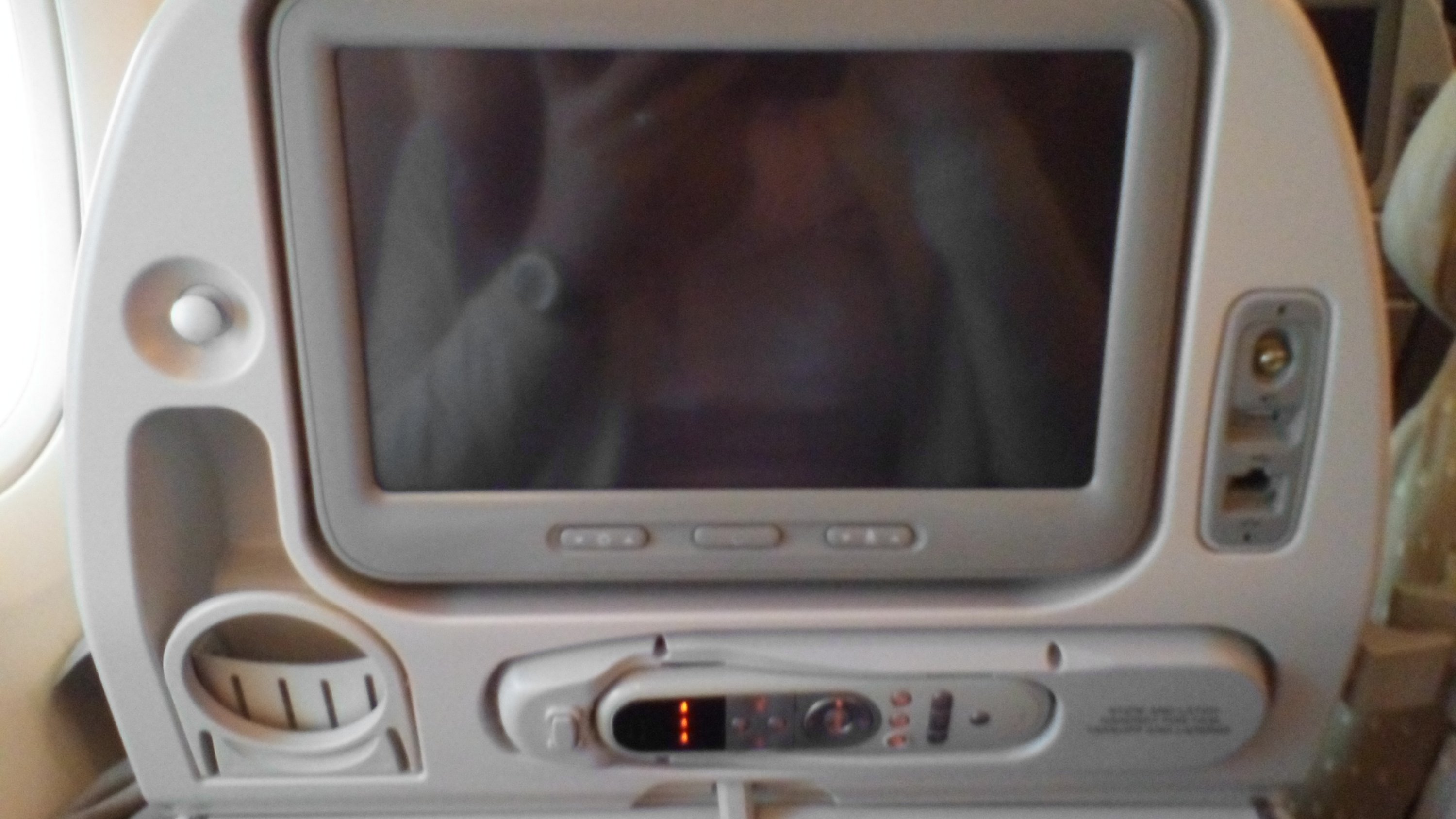 The A380 is a comparably new plane but they built in a system that felt like early 2000. The UI was pretty ugly and the only way to operate it was through the remote locate under the screen – no touch whatsoever. The remote buttons were thus already pretty worn out with bad response and bouncing. The interesting part was the plug panel to the right of the display with a video in (WTH!?), a USB port for data so that you can read PDFs and play media from storage and, very unique, a LAN port! That’s the first time I have seen a LAN port in a plane. What I missed was an AC plug. Most planes these days, espeially long haul, offer AC plugs to power laptops and stuff, but not here, that was disappointing (I planned on hacking a bit but had to scrap that then).

The service on the plane was good, the personal was super friendly and very forthcoming. But I also had better already, e.g. on a recent flight that super suprised me with Hainan Airlines from USA to China on a Boeing Dreamliner, but that’s another story.

My trip today was: