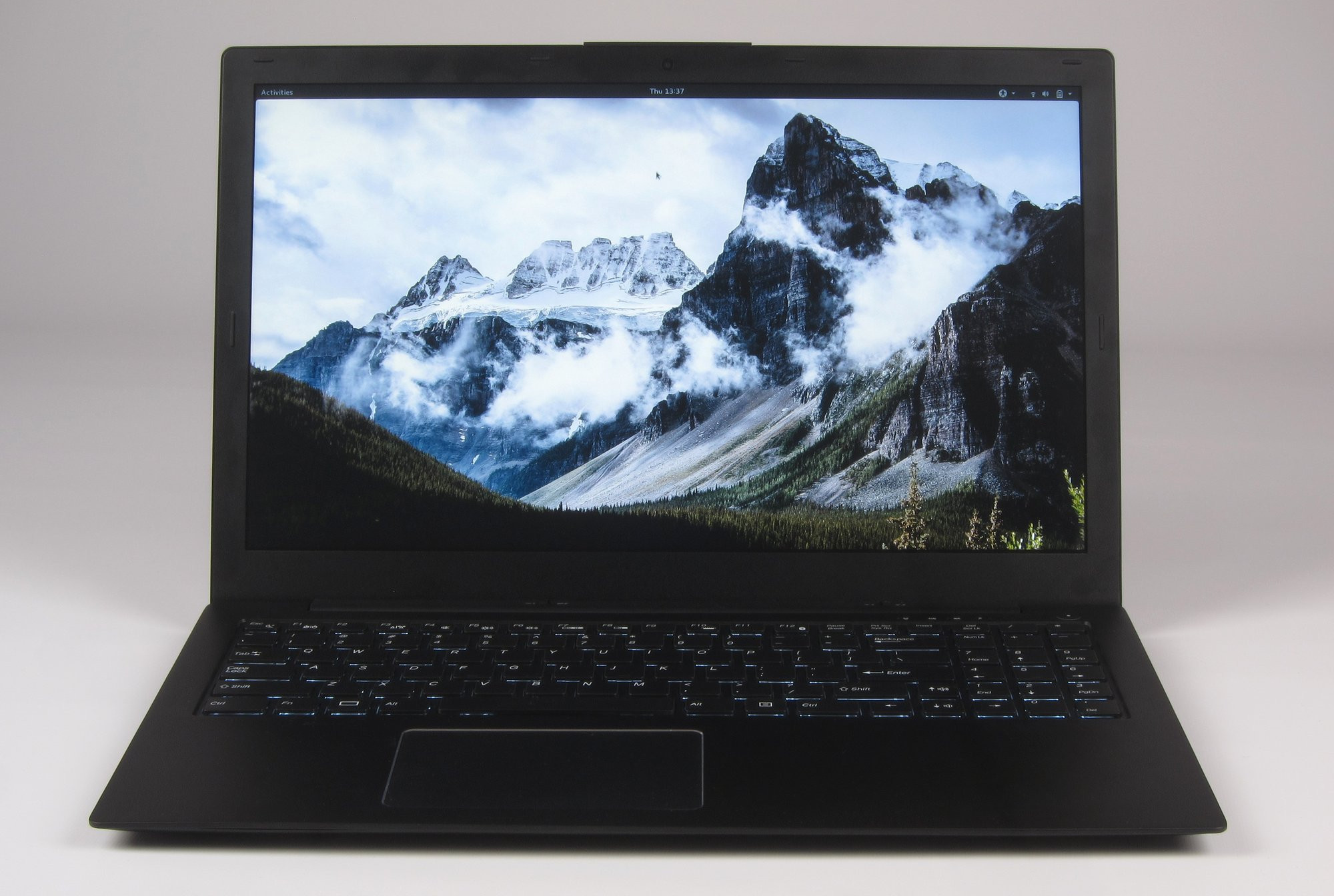 Yesterday I finally received a Purism Librem 15 laptop for review. A few months before I also got a Librem 13 v1 which was already pretty nice but showed some details that I did not fully like for a device at that price point. The new Librem 15 v2 in contrast is a really nice device.

First of all all, before I dive into a hardware description, a word on what this has to do with FLOSS. All Purism devices ship with FLOSS software pre-installed. Moreover Purism tries to avoid non-free software and parts as far as they possibly can. But you also have to be realistic, you can not completely avoid it or you have to build something that is technologically completely outdated. Purism ships its Laptops with PureOS, a customized Debian version. Another goal of Purism and thus of PureOS is to try as hard as possible to protect user’s freedom and privacy. The pre-installed software is customized with add-ons to achieve this, like harddisk encryption by default, ad-blocker in the browser, pre-installed apps for communication that respect freedom and privacy etc.

A little deeper into the system and touching the hardware the lastest Librem laptops starting from Librem 13 v3 and Librem 15 v2 ship with Coreboot by default. This is pretty awesome in two ways. First of all the Librem laptops are some of the very few current hardware laptops that have Coreboot support at all. Second the Coreboot porting effort made it possible that the Intel ME has been mostly neutered in the Librem laptops which again protects user’s privacy. The Intel ME is a part of many modern x86 hardware PCs that most users are completely unaware of. It is separate processor running a pretty huge firmware, completely independent of the system CPU and software, It has the ability to access almost any component in your PC, especially network interfaces, bus systems and main memory. Exploits have the ME have the potential to completely compromise system security since it can be used to spy on almost everything in your system, being it passwords, PINs, your most private communication etc. So you definitely want to make sure that this Intel ME coprocessor is under your control and does not control your data.

The Purism Librem Coreboot is one step into this direction, but only a first step. The ME is very tightly integrated into the boot process of the modern Core i5 and i7 chipsets including their ROM codes. The ME is also almost undocumented by Intel making it very hard to get rid of it. A typical issue is that a completely neutered ME causes the PC to reset 30 minutes after powering up. The current status in the Librem laptops is that about 50% of the ME code has been removed and that the ME is not operational. But there is still the other 50% of the code left in the boot process so we can not say for sure what these 50% are possibly still capable of doing. But work is going on. Purism has an internal version with ME removed to about 97% but then the miniPCIe slot with the WiFi card does not work anymore.

While talking about firmwares. Another goal of Purism is to get the FSF RYF endorsement, i.e. “Free Software Foudation – Respects Your Freedom“. One of the requirements of the RYF is that firmware that is required to operate a hardware must either be included in hardware as a ROM, EEPROM or Flash chip or it has to be free, i.e. its sourcecode must be free respecting the four freedoms of free software. This is an issue since many modern harwdares do not implement storage chips anymore to safe cost but require software to download the firmware at runtime.

The Librem laptops come without any runtime loadable firmware and most of the hardware is working nicely with it – except for the Bluetooth chip. This is a Atheros AR3012 Bluetooth 4 (with BLE) chip built into the Atheros AR9k WiFi module used in the Librem laptops. If you want to use it you have to download and install this firmware yourself possibly compromising your freedom.

All other firmwares are embedded in some form form of ROM chips. But Purism is working on getting these freed as well. It would be incredible to have the sourcecode e.g. of the embedded controller (EC) to weak it 🙂 But currently these are not yet available.

The Librem 15 hardware specs are good for geeks and nerds but surely not for gamers. If you are looking for a gaming laptop then this is not your’s. But for all others you get decent hardware for your money with good build quality.

The case is thin and light and mode of anodized aluminum. It really looks nice, solid and without anything that is not needed – especially it is not branded anywhere visible to you or bystanders marveling at your new laptop. As a neat detail also the backlit keyboard does not have the typical “windows” key but instead is a just a square, the Purism logo. Pictures of the laptops can be found here on the Purism website.

A signature feature of the Librem Laptops are the hardware kill switches. There are two of them built into the hinge bar of the display lid. The hardware kill switches physically disconnect devices from the system to protect user’s from being spyed. One of the switches will disconnect power from the built-in camera making it completely inaccessible from any software – even the NSA can not reenable it without touching that switch. The switch also disconnects the microphone so that audio from your room can not be recorded. The other switch physically cuts power to the radios, i.e. the WiFi and Bluetooth. If you flip this switch you are 100% disconnected (if there aren’t any USB devices attached). So these switches are again to protect your privacy and freedom.

For a 15.6″ device the Librem 15 feels very light. In fact it only weighs 1830gr. The aluminum shell looks and feels great, sturdy and made to last. The display is a matte (non-glare) full-HD (1920×1080) IPS panel with LED backlight. The color reproduction is nice (in contrast e.g. to my Lenovo Yoga S1 which show kind of dull colors). The keyboard is a chiclet keyboard type with a nice keypress feeling. The key are stable, not wiggeleing, and typing does not produce more noise than just the typing. The backlight of the keyboard can be set by a hotkey in two brightness levels.

Pretty amazing is the temperature. In modest use, like surfing the web or editing documents (or coding 🙂 the device stays very cool. In the keyboard side you do not feel any warmth and even the bottom is almost as cool. For a modern Intel device this is pretty amazing and also very good especially during summer – I hate it when my hands start to sweat because the machine I am working on heats them additionally to the summer heat.

The new touchpad is way better than it was in the Librem 13 v1 I had before. It is bigger and has a new Elantech controller offering hardware multitouch gesture support. The edges of the touchpad are think so it integrated very nicely into the keyboard surface. The aluminum around it has been milled out blank which gives it a nice contrasting look.

Suspend to RAM and resume is pretty fast! It takes about a second to go into suspend and another second to resume. This is very fast! Way faster than most x86 laptops I know. It turns the Librem laptops into pretty perfect mobile companions. The lid switch supports suspend and resume, i.e. you can simply close the lid and it sleeps almost instantaneously and once you open the lid again it has almost resumed when it’s fully open.

A little more under hood of the hardware, the mainboard has space to host two storage devices, one 2.5″ SATA port and one NVMe M.2 slot giving you plenty of storage on the go – and a choice of technology. By default it ships with a 2.5″ 256GB SATA SSD. The main memory is DDR4 DRAM and it comes with 8GB by default, maximum 16GB.

A really nice laptop! The build quality seems very good, the pre-installed software PureOS and Coreboot make it the #1 choice for freedom lovers. The performance is very good, at least for me, and makes working with it very enjoyable – especially since it stays pretty cool. The price is pretty high though. But keep in mind that Purism is still a pretty small company and thus the number of devices is pretty low, driving prices high. This will hopefully improve over time. But you also get something for the money, a quality built machine with freedom and privacy protection in mind. Where else can you get something similar?

Would I recommend getting one? Yes! If you can afford it.