I just got myself a new toy for the workshop, a water chiller for my 40W laser cutter. Like with pretty much all these laser cutters, it needs water cooling for the CO2 laser tube. Usually they come with an aquarium pump and some silicone tubes you can just throw into a bucket of water. While this is pretty easy and efficient enough in many cases, it also has a number of problems. First I find this pretty clumsy. You end up with a partially filled water container which still contains a significant amount of air which again gives enough oxygen to all living things in the water to grow. Next the cooling is not really great since you only circulate from the bucket to the tube and back. It will eventually heat up depending on the energy the laser tube emits. It will only cool by convection, i.e. the little heat the bucket can dissipate from its walls. I wanted something a little more elaborate and looked around. Finally I settled for one of those Chinese CW-3000 “industrial water chiller”s: 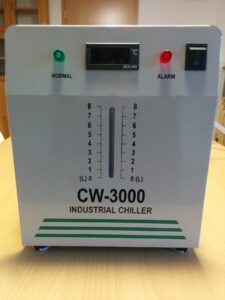 I paid roughly 100EUR for it, new from eBay, totally crazy. First I was amazed by its size when it arrived. This thing is massive, almost 50cm in depth, 40cm wide and almost equally tall. It can hold about 10 liters of liquid in its reservoir tank made from plastic: 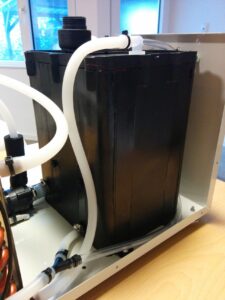 Further included are a pump, water flow control which sounds an alarm if there is an obstruction in the water circulation, a digital thermometer in the control panel, but most importantly a convection cooler unit with a pretty big fan attached: 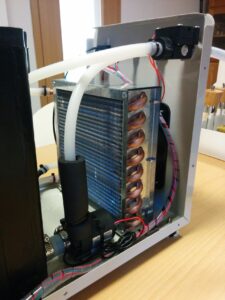 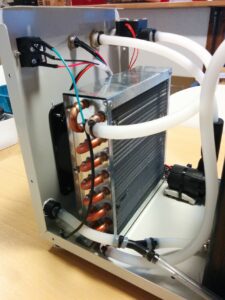 The fan will suck air through the convection cooler, pretty much all the time. The manual says it will start at temperatures of about 20C and above and will stop at 10C or below. On the back of the unit are the to be expected connectors for water inlet, outlet and power: 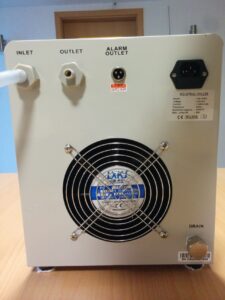 There is also a 3-pin connector for an external alarm or e.g. a power breaker to the laser in case the temperature rises too high. The inside looks very clean and nice to me, it is indeed pretty well made, actually way better than I expected, especially at this price point: 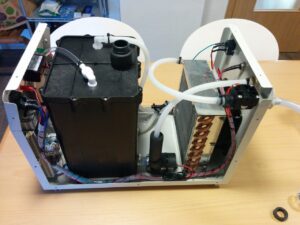 Everything touching water is either made from plastic (tank, tubes) or copper (cooler), so no rust. I need to wait for some tubing adapters to be able to attach it to my laser so I have not filled it with liquid yet. I plan to fill it with demineralized water and probably add some detergents to avoid growing anything. I also plan to fill up the water system as much as possible to avoid any air in there. No air and having a kind of closed loop system will hopefully also help to avoid rotting of the water or growing anything so that the water can stay in there almost indefinitely – like you do with a water based heating system in your home, you fill it up once, get rid of all the air inside and be done with it. You do not replace the water, you even should not. I also hope that the silicone tubes are flexible enough to compensate for the volume change of the water when it warms up or cools down.

Let me add some words about this type of chiller. Sure, this is a kind of passive cooler in the sense as there are no actively coolig components, nothing like a compressor or anything else. So quite naturally this type of device can at maximum keep the water at room temperature since it uses the room’s air to cool the water down. Also of course the cooling capacity of the radiator plus fan is limited, i.e. the amount of energy that can be extracted from the water is limited.

So if you intend to use such a simple chiller for a laser tube or anything that emits significant amounts of thermal energy, this is probably not the right device for you. I intend to use it with a max 40W CO2 laser which will usually be operated at far less than the nominal 40W and only for quite short periods of time in my workshop. So I expect this to be sufficient for me. My two main goals with this device are first of all to get rid of the pertty clumsy setup with an aquarium pump and a simple bucket. And second the simple air convection cooling is for sure alreayd a big improvement compared to a simple bucket of water.

And just in case this may not be enough and I need to cool it more, I already have a plan-B 🙂 I got myself a liquid cooler system using a pretty high power peltier element with large heat spreader and three (!) fans, looks roughly like this:

This is for sure not the most energy efficient way (probably the worst) but it should be able to cool down the water quickly and down to almost any temperature. If needed I will put this into a separate case together with a thermostat and a switching power supply and just add it to the water tubing, between the laser and the chiller.